The Académie de Philatélie was founded in 1928. It is the first to have been created in the world. Since the start its principal object has been to « contribute to the development of philately by all means possible »

All of its members have been elected. The founding members were chosen in 1928 following a referendum comprising almost 5000 voters, open to all philatelists and organised by « Le Messager Philatélique » the « official revue of the 77 principal French philatelic societies » at that time. The candidates were all chosen and elected after a secret vote. The only criterion for election is « the philatelic quality » of the candidate and does not take into consideration any title, professional, commercial or associative function.

On the occasion of its fiftieth anniversary in 1978, the Académie de Philatélie was honoured in France, where stamp issues are strictly controlled, by the issue of a special postage stamp. 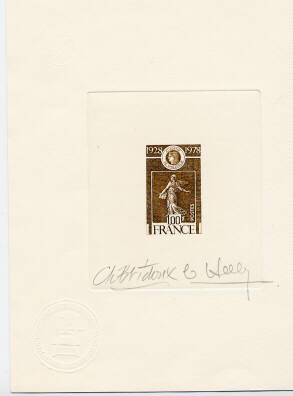